I have to admit that when I asked you all to let me know what you wanted to know more about I was excited to receive the emails, however I was even more surprised at the number one question!  It had to do with lot lizards.

First, yes, there really is such a thing as a “lot lizard” – basically it’s a prostitute that works a truck stop lot. 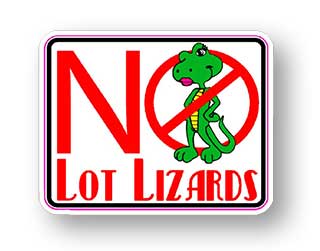 I’m not sure of the origin of the name, but it kind of fits and unfortunately they do exist.  Some truck stop lots have more than others.  I have had my door knocked both early in the morning and late at night. They were pretty surprised to see me answer.  I politely told them I wasn’t interested and that was usually the end of it. I know they have knocked on my husbands door too.

My favorite story is when I was fueling our truck one day. I was actually in the fuel lane and I had a driver approach me and ask me if I was working the lot. I looked him straight at the eye and quickly replied, “No, are you working the lot?”  It really through him.  At first I was super offended when guys would honk at me or question me.  It still bothers me, I mean I don’t dress like a prostitute, but instead of rolling my eyes in disgust I’ve learned to come back with a witty response.

Have any other questions or a suggestion for a topic? I’d love to hear from you! Please email me at [email protected] and put “Trucker Tuesday” in the subject line.