If You Got it, a Trucker Brought it

Have you heard the phrase, “If you got it, a Trucker brought it”?  It’s true. It’s often a hard and thankless job.

I found this poem called A Trucker’s Late Summer Night’s Dream by Vicki Scofield and had to share it. 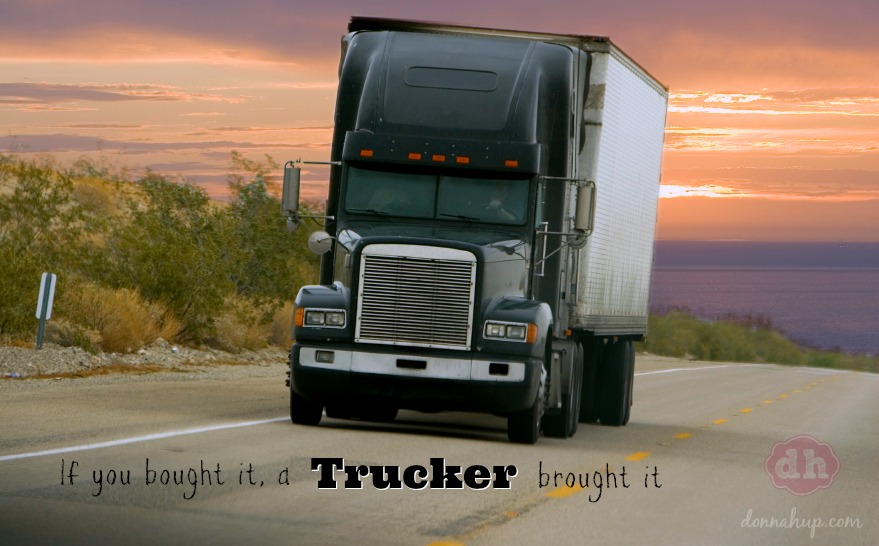 The truckers were angry, “Now, why can’t they see?
This country can’t function without you and me.
It’s beyond comprehension; can’t they understand?
The railroads can’t possibly supply all the land!”
“What will they do and what will they eat?
Who’ll supply them with milk, potatoes, and meat?
How will they get soap, toilet paper, or shoes?
When the stores all run out, then what will they do?”
“They can’t get to work without gas for their car
Without all of us truckers, they can’t get very far!”

But the lobbiests had money and time on their hands
They went before Congress with a list of demands.
The truckers kept working, with no time to meet.
It seemed they were losing . . . it seemed they’d been beat.
“There’s too many of us to meet in one place,
And no time for meetings at our hectic pace.
We keep these trucks rollin’ all day and all night,
Without much time off to fight for our rights.
We can call up our Senators and Congressmen, too,
But without organization nor money, then what can we do?”

It was beyond comprehension — a total surprise,
The lobbiests succeeded in trucking’s demise
The people all thought that the trucks weren’t needed,
And the trucker’s reaction was ignored and not heeded.
So, all over the land, the trucks were sent home,
And truckers, in a panic, called their families on the phone.
“Let’s stock up our pantries with needed supplies
Plenty to live on while everyone cries!”

“Let’s pack up our poles and head for the lake
We’ve been working hard — it’s time for a break!”
“42 on that one,” one trucker said,
“I’ve got a long date with my pillow and bed.
It’ll be a real treat to sleep every night,
To tuck in my kids and kiss them goodnight.”

So, one by one, they delivered their loads,
And within a week, they were all off the road.
They went to the house and went to the lake,
And the people soon realized they’d made a mistake.
The people went to the stores, but the shelves were soon clear
There wasn’t any steak or chicken or beer.
So they ate at McDonald’s and at Taco Bell,
But within a few days, they sold out as well.
The streets were soon clear of the four wheelers, too,
For without any gas, there wasn’t much they could do.

It was all over the news and on the front page
“The Country’s in Chaos!” “This is an Outrage!”
“There’s a shortage of everything! We’ve all been so wrong
The fact is, we’ve needed those trucks all along!”
The news came from Walters, and Jennings, and Chung,
But it was said best of all by a boy pretty young —

“My dad’s a trucker,” the little guy said,
“And he works pretty hard to keep you all fed.
He isn’t mean and he isn’t rude
He drives many miles to bring you your food.
If you just got to know him, you’d surely see,
Why he’s so special to my mommy and me.
He drives in the heat and he drives in the snow,
And our prayers are with him, wherever he goes.
Every night when I turn out my light, I pray,
That God keeps my daddy safe the next day.
He’s stopped many times when a car was broke down,
To change a flat tire or take someone to town.
To me, he’s a hero — riding tall in the seat
Of that sharp-looking rig, his trusty ol’ Pete.”

His story was featured on every network
Just an eight year old boy, in jeans and t-shirt.
The truckers all knew their vacation was up
It was time to get rollin’ and load up their trucks.
Many things changed in the weeks that just passed
Truckers regained the respect they’d had in years past.
It wasn’t too much to demand or expect
Mutual consideration and mutual respect.
For in most of these trucks, up behind the wheel,
Is a heart made of gold, and a person who’s real.
But it took empty shelves and the words of a youth,
To outline the facts and point out the truth!