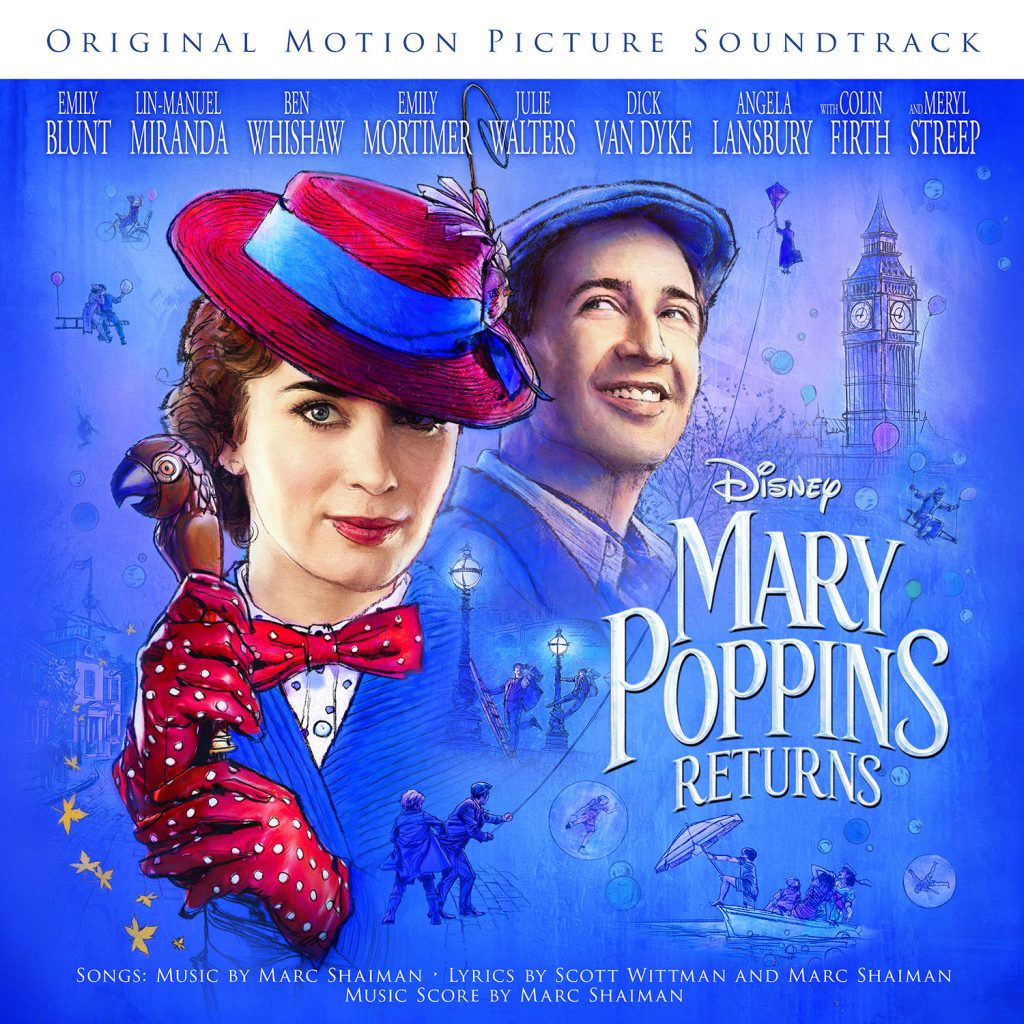 “It’s Wonderful to See You” Clip

Advance tickets for Disney’s “Mary Poppins Returns” are now available for purchase. Fans looking to be among the first to experience the film can attend opening night fan events on December 18 held exclusively at Dolby Cinema at AMC Theatres across the country*. On December 7, the digital album and physical CD of film’s Original Motion Picture Soundtrack are set for release. The soundtrack digital pre-order includes two instant grat tracks, “Trip a Little Light Fantastic” and “The Place Where Lost Things Go,” which are available at all digital retail providers. Be sure to check out—and share with your readers—the full track list and two new spots below, and don’t forget to see “Mary Poppins Returns” when it hits theaters nationwide December 19!

1. “(Underneath the) Lovely London Sky” – Performed by Lin-Manuel Miranda

3. “A Conversation” – Performed by Ben Whishaw

4. “Can You Imagine That?” – Performed by Emily Blunt with Pixie Davies, Joel Dawson and Nathanael Saleh

7. “A Cover Is Not the Book” – Performed by Emily Blunt and Lin-Manuel Miranda and Company

8. “The Place Where Lost Things Go” – Performed by Emily Blunt

14. “(Underneath the) Lovely London Sky (Reprise)” – Performed by Lin-Manuel Miranda

19. “Banks in the Bank” – Performed by Marc Shaiman

20. “Into the Royal Doulton Bowl” – Performed by Marc Shaiman

23. “Chase Through the Bank” – Performed by Marc Shaiman

In Disney’s “Mary Poppins Returns,” an all new original musical and sequel, Mary Poppins is back to help the next generation of the Banks family find the joy and wonder missing in their lives following a personal loss. Emily Blunt stars as the practically-perfect nanny with unique magical skills who can turn any ordinary task into an unforgettable, fantastic adventure and Lin-Manuel Miranda plays her friend Jack, an optimistic street lamplighter who helps bring light—and life—to the streets of London.

“Mary Poppins Returns” is directed by Rob Marshall. The screenplay is by David Magee and the screen story is by Magee & Rob Marshall & John DeLuca based upon the Mary Poppins Stories by PL Travers. The producers are John DeLuca, p.g.a., Rob Marshall, p.g.a. and Marc Platt, p.g.a. with Callum McDougall serving as executive producer. The music score is by Marc Shaimanand the film features all new original songs with music by Shaiman and lyrics by Scott Wittman and Shaiman. The film also stars Ben Whishaw as Michael Banks; Emily Mortimer as Jane Banks; Julie Walters as the Banks’ housekeeper Ellen; Pixie Davies, Nathanael Saleh and introducing Joel Dawson as the Banks’ children, with Colin Firth as Fidelity Fiduciary Bank’s William Weatherall Wilkins; and Meryl Streep as Mary’s eccentric cousin, Topsy. Angela Lansbury appears as the Balloon Lady, a treasured character from the PL Travers books and Dick Van Dyke is Mr. Dawes, Jr., the retired chairman of the bank now run by Firth’s character.

For more information on “Mary Poppins Returns,” follow us on:

*In addition to watching the film one day early, fans attending the Dolby Cinema at AMC Fan Events will receive a collectible pin representing a donation made on their behalf to the Variety Children’s Charity and a code to download the “Mary Poppins Returns” soundtrack.